I was on Erik Davis’s podcast, Expanding Mind! Check it out here. It was really fun! 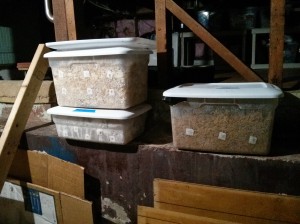 Tubs in the basement of one of my interlocutors growing culinary mushrooms.

“Home Tek 101: cross-kingdom intimacy and the re-domestication of the lab” was a paper I presented as part of “The Mushroom Multiple,” a panel I co-organized at the annual meeting of the American Anthropology Association, November 2017, in Washington DC.

Peter Oviatt and I organized this panel for the 2017 annual meetings of the AAAs in DC. We got the dreaded 8am time slot on the last day of the conference but nonetheless it was a blast to hang out with these academic mycophiles.

Madeline Brown spoke about on the communal partnerships among Yi households in Yunnan for gathering matsutake, and how the mushroom creates temporal, spatial, and social patterns in these communities, from her dissertation on the same topic.

Peter discussed truffle farmers through the lenses of alternative forms of capital such as leisure capital. He is currently researching truffle farming in the Pacific Northwest and France in the context of the science of mycorrhiza (i.e., fungi that live symbiotically with plant associates, like truffles) and multispecies collaborations in truffle farming.

Nate Greenslit read a paper about how to make sense of this transformative encounter with the Other in the psychedelic experience and the whiteness and colonial logic implicit in this narrative. He is currently working on a book project on the subject of psychedelia and questions of race.

Pierre du Plessis presented a paper about gathering Kalahari Truffle with the San tribe in South Africa by way of traditional tracking skills, thinking about what it means to track-gather rather than track-hunt. Unfortunately, Pierre couldn’t make it to the conference so his paper was read by Filippo Bertoni.

🥁… And the award for best anthropology-mushroom pun goes to…. Pierre du Plessis for “Staying With The Truffle” (for the Haraway fans)! 🏆 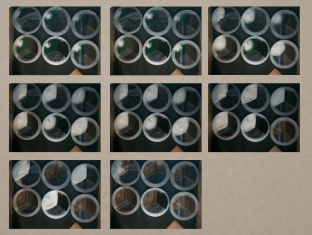 “Mycoremediation: the making and unmaking of a citizen science,” on the panel, “Citizen Science I: Co-Constructing Citizen Science” @ the Annual Meeting of the Society for Social Studies of Science (4S), Boston, MA, Aug 30 – Sept 2, 2017

In this presentation, I look at how the vision of mycoremediation–that is, the bioremediation of toxins by fungi–has fared among amateur applied mycologists. The idea has circulated for sometime among academic mycologists but it found a popular audience in Paul Stamets’s book Mycelium Running: how mushrooms can help save the world (2005). During my field work among such do-it-yourself mycologists in the SF Bay Area, I found that this vision of a heroic, grassroots citizen science that can heal the earth through human-fungal collaboration was gradually replaced by disillusionment and doubt about this technique.

In this paper, I explore how we might understand this technological vision as scholars. Participants’ ideas about what citizen science can and should be (I.e., dispersed, accessible) reveal a vision of science that is participatory and biocentric. Drawing on Jamie Lorimer’s work, mycoremediation illustrates the tension that can emerge in citizen science between the affective and imaginative force of its ideal and the satisfactions of mastery, and its social recognition, in its implementation. Situated at the boundaries between amateur, speculative, and professional science, mycoremediation sheds light on these competing scientific modes. 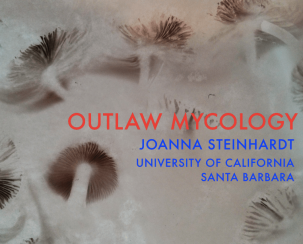 Unruly innovators, a panel at the BioFabbing Convergence: Fabrications and Fabulations, Geneva, Switzerland, May 10-14, 2017

In May, 2017, I traveled to Geneva to present in a panel that I put together, “Unruly innovators: illegal mushroom cultivation, DMT extraction, and homemade pharmaceuticals as comparative cases of outlaw user innovation,” with Johan Söderberg, a professor in the Department of Philosophy, Linguistics & Theory of Science at Göteborgs Universitet and Michael Laufer, Chief Spokesperson for Four Thieves Vinegar, for the BioFabbing Convergence: Fabrications and Fabulations.

This Convergence was organized by Bruno Strasser and Gabriela A. Sanchez at the University of Geneva, where they work with a number of scholars thinking about citizen science, the Citizen Cyberlab, Hackuarium, and the Hackteria Network.  It was supported by the Do-it-Together Science (DITOs) EU Project by Horizon 2020. Michael and I were grateful to receive support from these organizers to help with the flight to Switzerland.

Biofabbing was a unique attempt to bring together both DIY (do-it-yourself) scientists and the academics that study them. It was informal and somewhat self-organized (under the direction of the tireless Marc Dusseiller from the Hackteria Network), with people from biohacking and bioart collectives from across Europe. My takeaway is that “biohacking”/”DIY Bio” (and perhaps “bioart” could be thrown in here too) refer to an array of social and cultural practices that are actually quite divergent, all of them very much in formation, bringing together people from different backgrounds and with different political and vocational commitments. All of these terms–whatever they refer too–are getting a ton of press these days thanks to their promissory aura of democratic science; they seem to be artificially unifying heterogeneous values and practices. Bruno, Gabi, and others say pretty much the same in their article on citizen science, forthcoming in Science & Technology Studies; Marc posted a provocative article from Aeon.co with another critical take on this topic. I suspect values and interests will ramify in this community in the coming years. I’m curious to see where it all goes, and to chart the lines of division, dissent, and alliance.

My short presentation was on “outlaw mycology.” I described how fungal morphology creates particular practical allowances–what might be understood as collaborative forms of evasion–for those cultivating or wild-crafting illegal psilocybin-active species. It’s a rich topic, one I hope to return to for my dissertation.

I forgot to mention that it was at CERN!! Unfortunately, they wouldn’t let me smash any atoms but you do get  beam updates with your breakfast. A photo (via screenshot) from one of Paul Stamets’s early lectures, in 1998. In it, he discussed techniques that he, his friends, and peers used to spread Psilocybe spores on their way back from the psilocybin-rich region of Southern Mexico. They used to gather there with fellow psychedelic enthusiasts, mystics, ethnobotanists, and of course mycologists. In this photo, we can see giant caps of Psilocybe mushrooms being spore-printed on a wide-brimmed hat. 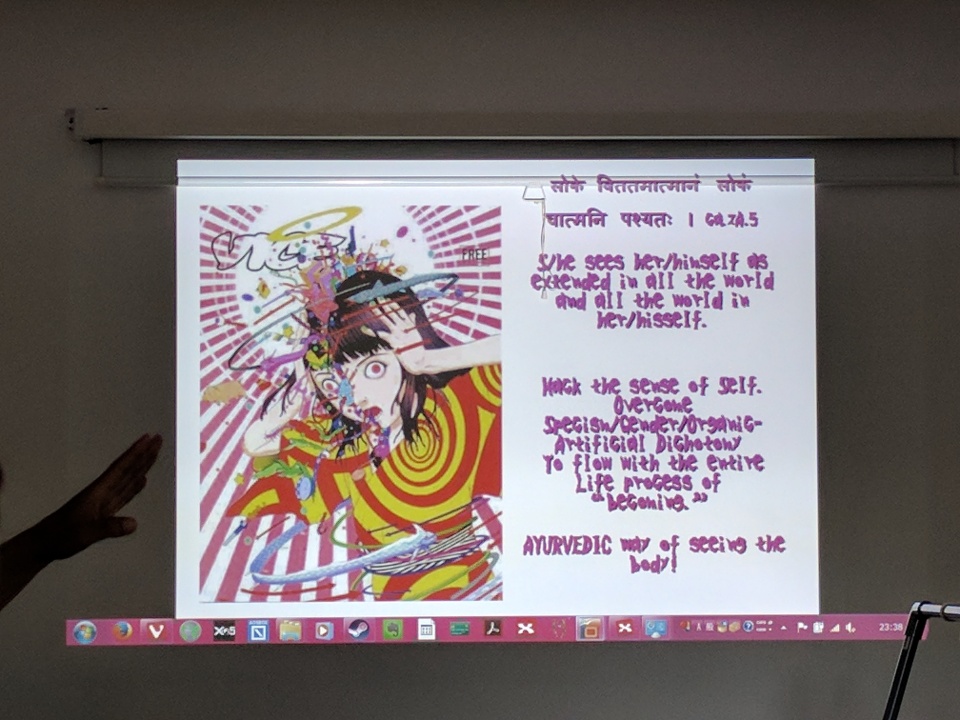 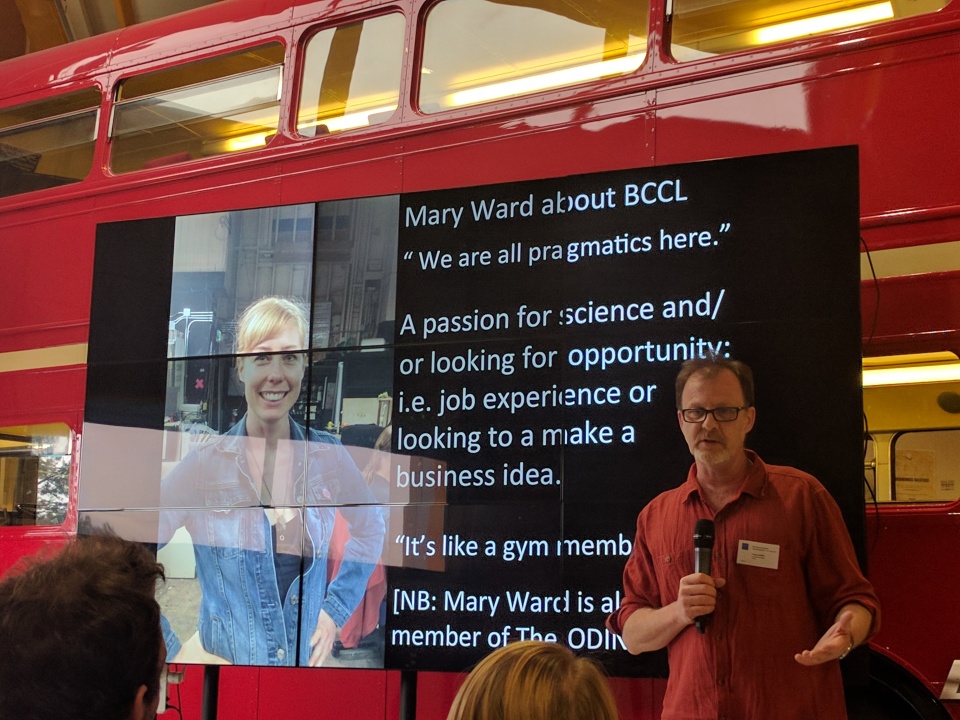 Thierry Bardini, from the University of Montreal, presenting on work at Counter Culture Labs in Oakland, California, which was also one of my field sites. (I know Mary!) 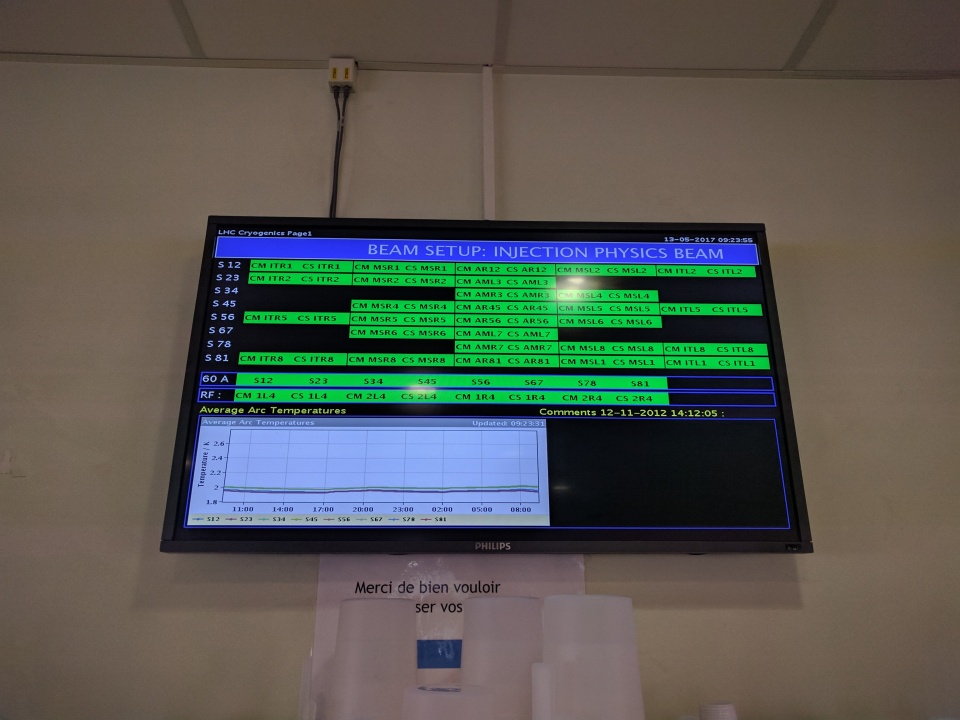 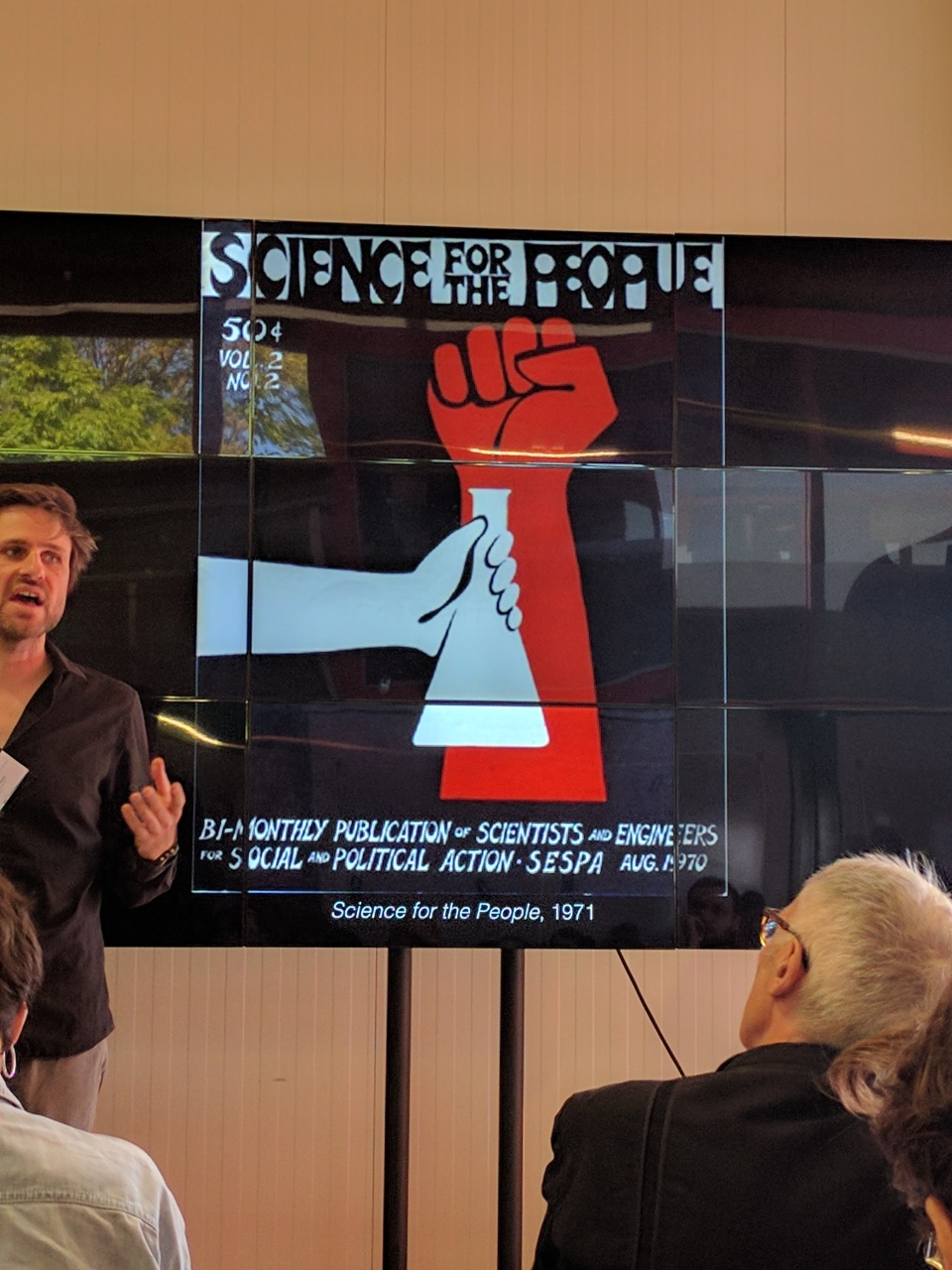 Bruno Strasser gives the opening lecture on the history of citizen science and populist cooptations of expert knowledge and production of counter-expertise.

In this paper, I think about what it means to call psilocybin mushrooms the “gateway mushroom.” As a counterpoint to the newfound visibility and legitimacy of psilocybin, DIY mycology attests to the significant underground permeation of psychedelia in the last half-century, especially its influence on popular ideas about natural science, technology, and nonhuman life within North American countercultures.

DIY mycologists draw on the accumulated know-how of Psilocybe cultivators and elaborate on philosophical and practical currents associated with American psychedelia. The human-fungal relationship epitomized by DIY mycology is an intertwined interspecies trajectory. Shaped by the constraints of criminalization, by the unique morphology of fungi, and by countercultural and biocentric ethos, this relationship eludes typical modern categories (e.g., wild/domesticated, subject/object). Looking ahead, possibilities for further intertwining are explored as these and other beloved species co-evolve into our homes, labs, factories, gardens, and public spaces. 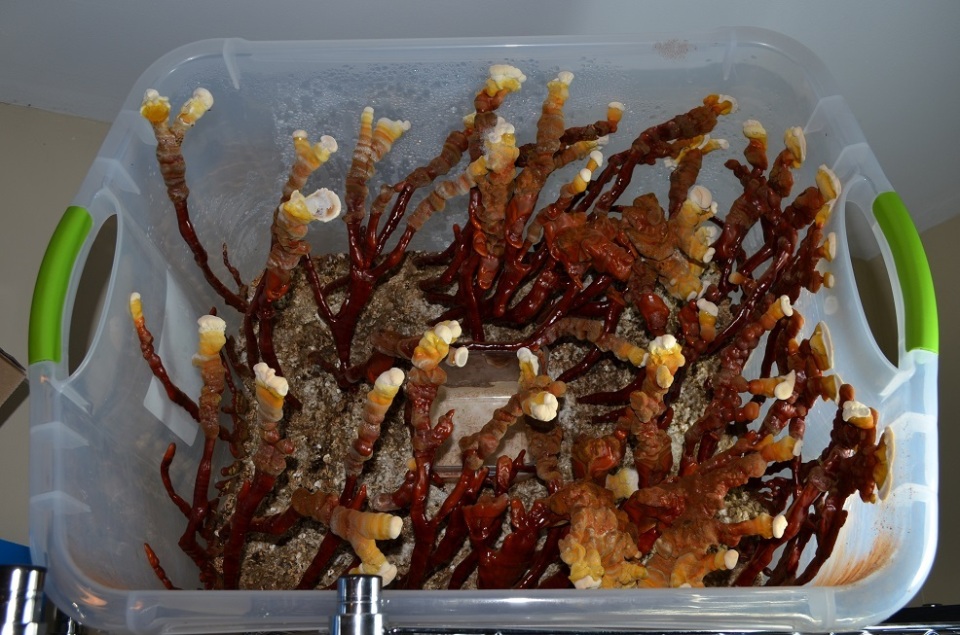 The monotub, originally invented for growing psychoactive psilocybin mushrooms, is adapted for growing reishi (Ganoderma lucidium), a medicinal mushroom used in traditional Chinese medicine. (This image was uploaded by a pseudonymous user on an online forum.)

Listen to me talk to James Padilioni Jr. on the Almost Already Podcast!

James is a PhD candidate at the College of William & Mary, writing his dissertation on San Martín de Porres. I met him at a conference and had fun talking to him about the speculative history of psychoactive plants and fungi and how to read the supernatural in histories of colonization and slavery. It was great to continue talking, this time about mushrooms. 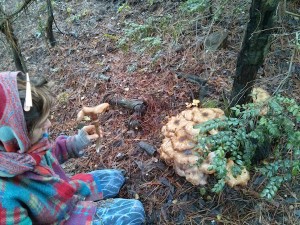 I presented this paper, “You can do this with mushrooms?!”: Wonder and DIY mycology, at a conference called Wonder and the Natural World, June 20 – 23, 2016, at the University of Indiana, Bloomington. It’s topic are expressions of wonder and amazement among practitioners of DIY (do-it-yourself) mycology. It’s based on my field work among such practitioners primarily in the SF Bay Area but also in urban areas in the Pacific Northwest. In this paper, I discuss the constituents of these feelings of wonder and consider their origins, inspired by the historical work by Katherine Park and Lorraine Daston on wonder and drawing on the anthropological consideration of potentiality.

This conference was hosted by the Indiana University Consortium for the Study of Religion, Ethics, and Society (CSRES). 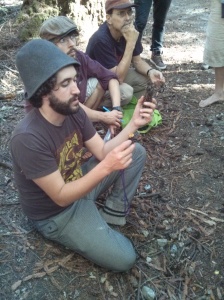 A member of the Radical Mycology collective leads a foray in a Santa Cruz forest. November, 2014.

In Ocotober 2014, after much deliberation, I changed my topic from urban agriculture to amateur mycology — specifically, a politicized form concerned with citizen science and myco-remediation that has been referred to as “radical mycology.” The idea of a “radical” mycology comes from a zine of the same name published in 2010 by the Radical Mycology collective. I continue to focus on similar questions related to American countercultural lineages, ecology, secularity, and spirituality, as refracted through these particular practices and concerns.

I did preliminary field work from July to August 2013 at three different urban farms in the East Bay, beginning with Urban Adamah in West Berkeley and including, tentatively, City Slickers in West Oakland and the Gill Tract Community Farm in Albany. This research was ultimately abandoned although the fundamental questions (and to some degree, the cultural-historical streams that constitute these sites) inform my current research on amateur mycologists in the Bay Area. The work on urban farms is not yet processed in any form but might generate a paper at some point in the future. 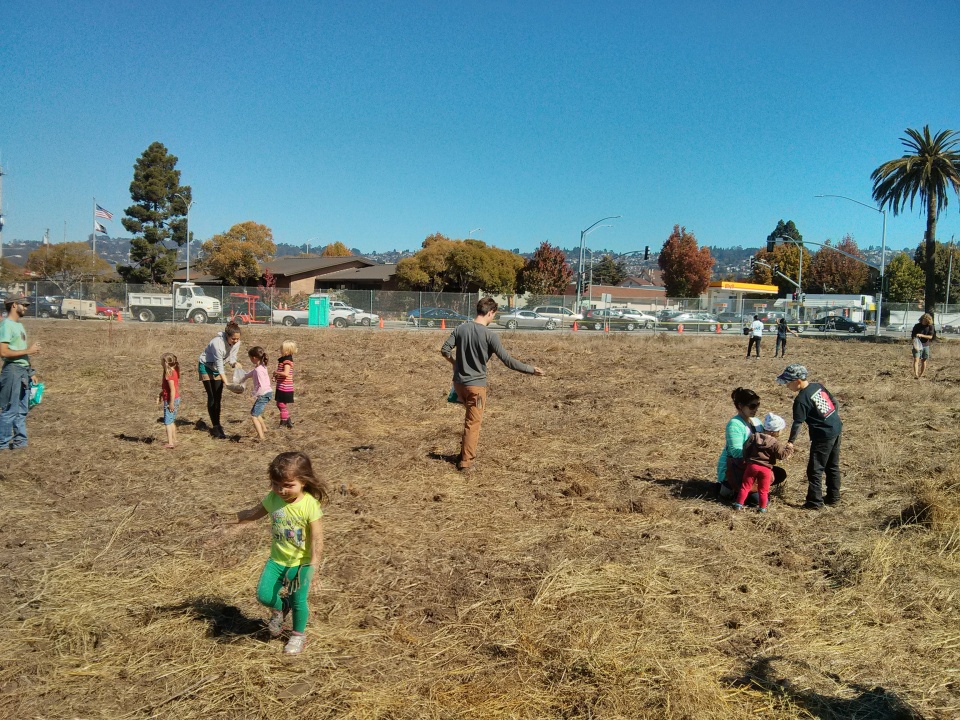 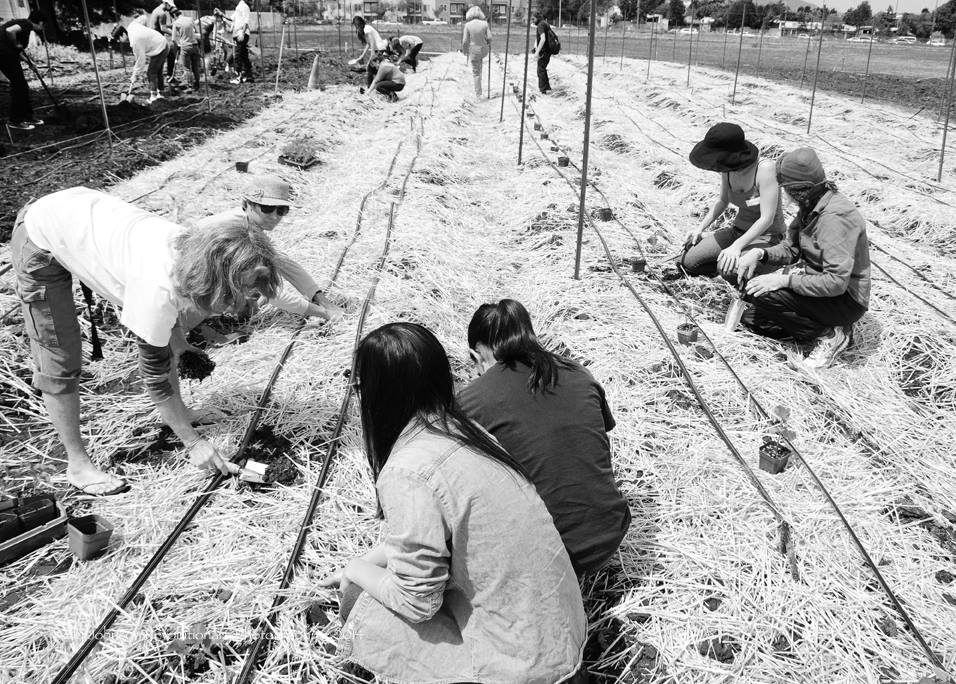 An open day at the Gill Tract. I’m in the black brimmed hat. 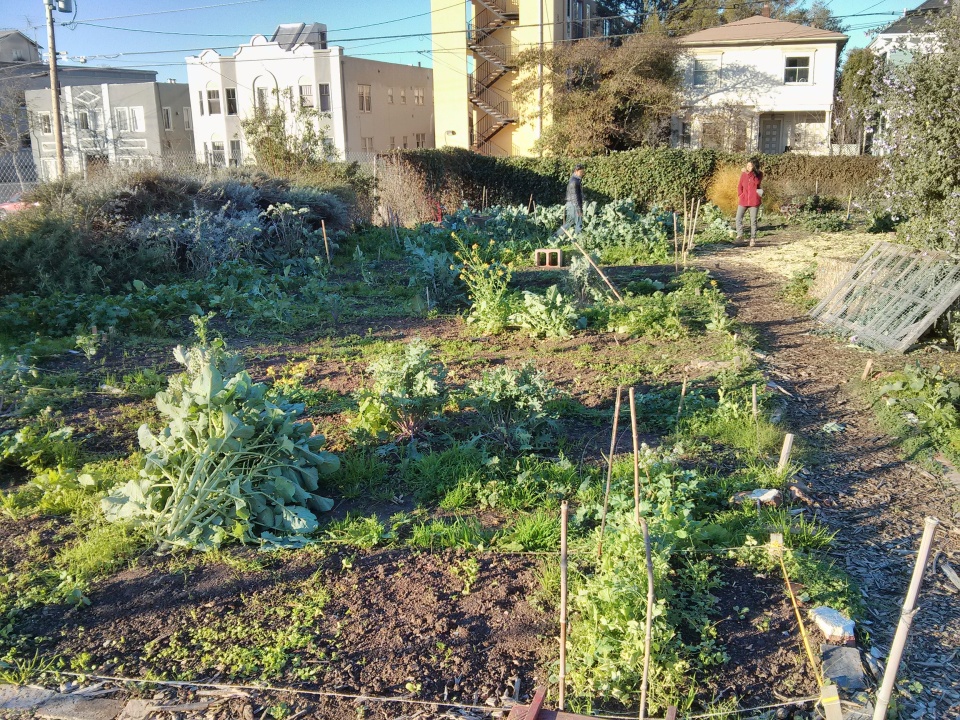 The Student Organic Garden where I took part in a class taught by argoecologist Miguel Altieri. His tireless GSIs led the practicum in the garden. 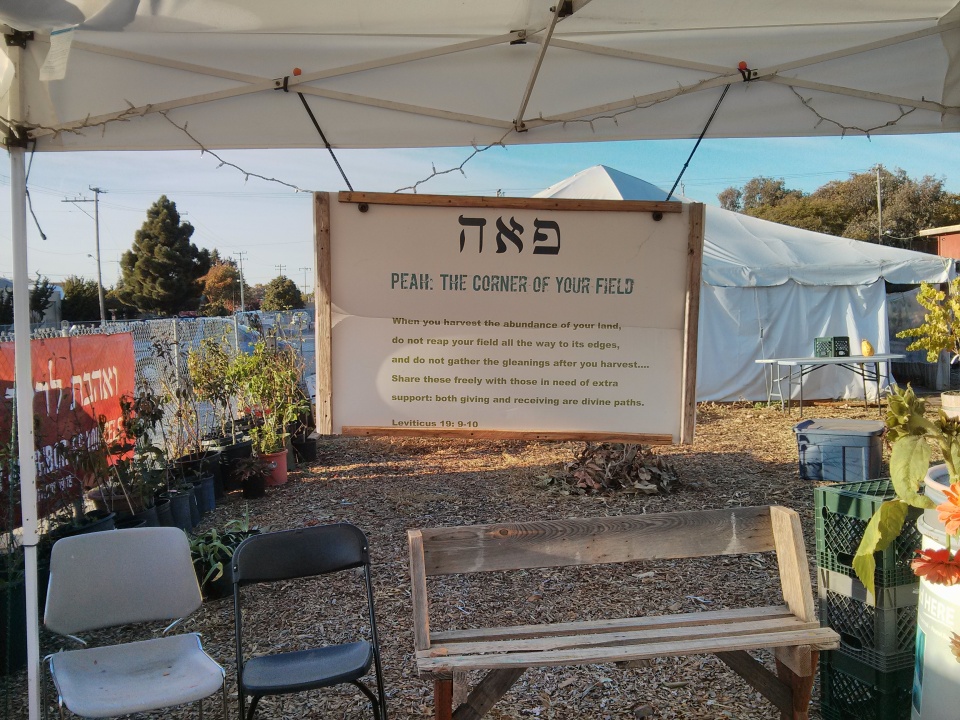 The entrance to the main area of the farm at Urban Adamah. The sign explains the principle of tithing in Jewish Law, signified by the word “pe’ah,” meaning “the corner of the field.” (These laws are explained in the Torah in Leviticus 19:9-10, Leviticus 23:22, and Deuteronomy 24:19-22 and in the second tractate of the first book of the Mishnah, Seder Zera’im.) At Urban Adamah, it is interpreted as a call to charity, in this case a weekly free food stand for “the community in need.”